Skeptical Researching in the Age of Media Mistrust: Home

The Term Fake News: Use it or Lose It?

If you say Fake News, most people have a pretty good idea what you are talking about. Or do they? Since its rise in popularity during the 2016 presidential election, the term "Fake News" has become highly politicized, its meaning manipulated to mean different things depending on the context. Researchers Claire Wardle and Hossein Derakhshan offer the following terms as more nuanced ways to discuss how information is used in the media landscape. The following definitions come from their glossary.

Misinformation - "Information that is false, but not intended to cause harm. For example, individuals who don’t know a piece of information is false may spread it on social media in an attempt to be helpful."

Disinformation - "Information that is deliberately created or disseminated with the express purpose to cause harm. Producers of disinformation typically have political, financial, psychological, or social motivations."

What makes a news story fake? 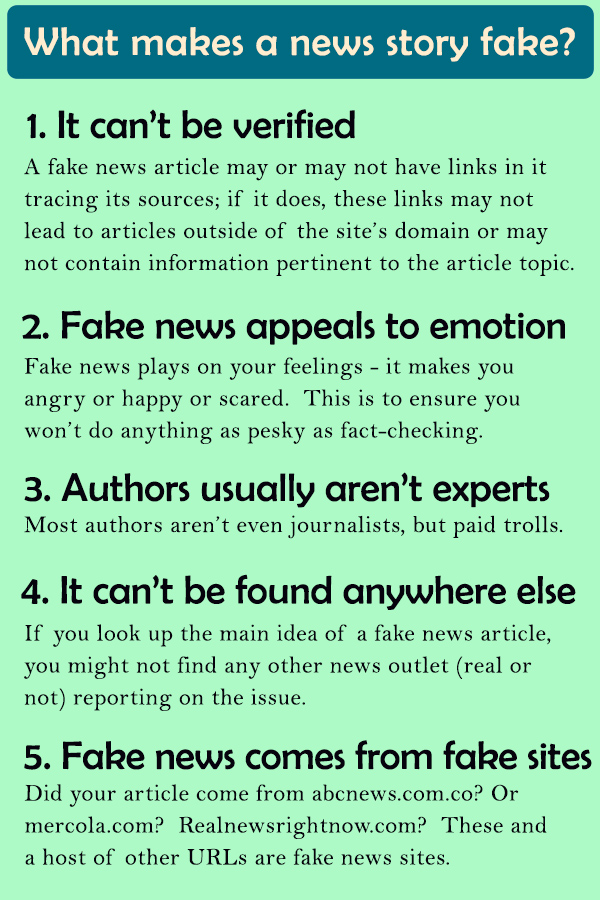 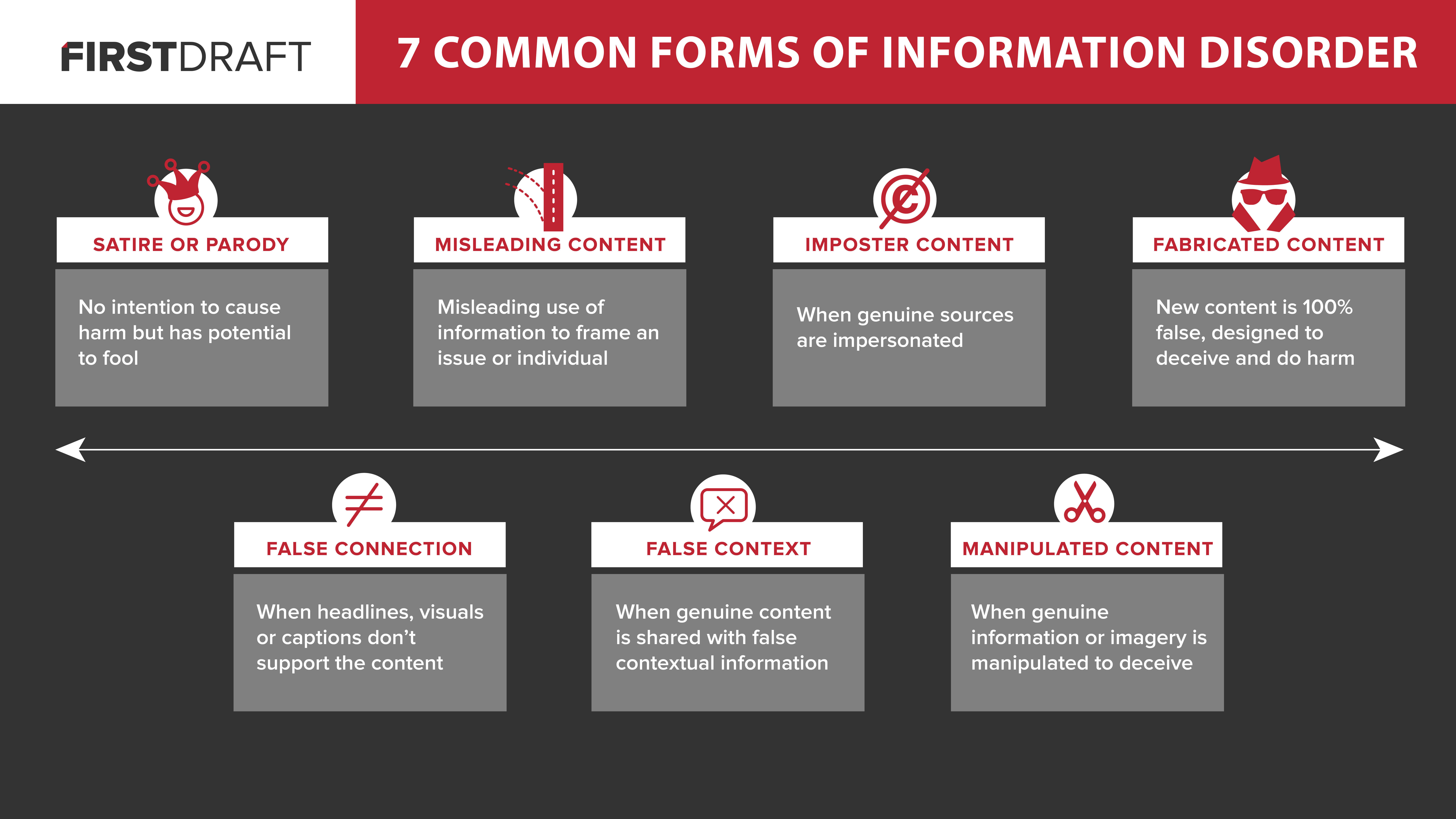 Four Tricky Ways That Fake News Can Fool You (TED)

"The promise of the Internet is that it is a great democratizing force, allowing everyone to express their opinions and have immediate access to all the world’s information. Combine these two, and you have a virtual world of information and misinformation cohabiting side by side, staring back at you like identical twins — except one of them will help you and the other one will hurt you."

How to Tell Fake News From Real News (TED)

"Want to strengthen your own ability to tell real news from fake news? Start by asking these five questions of any news item..."

"...an example of how, in an ever-connected world where speed often takes precedence over truth, an observation by a private citizen can quickly become a talking point, even as it is being proved false."

"Falsehoods almost always beat out the truth on Twitter, penetrating further, faster, and deeper into the social network than accurate information."

"Fake news, and the proliferation of raw opinion that passes for news, is creating confusion, punching holes in what is true, causing a kind of fun-house effect that leaves the reader doubting everything, including real news … Narrowly defined, “fake news” means a made-up story with an intention to deceive, often geared toward getting clicks. But the issue has become a political battering ram, with the left accusing the right of trafficking in disinformation, and the right accusing the left of tarring conservatives as a way to try to censor websites. In the process, the definition of fake news has blurred."

"So do you remember reading that Hillary Clinton paid Jay Z and Beyonce $62 million dollars for performing at a rally in Cleveland before the election? You might have, but the story is false, one of many posted on hyper-partisan websites and spread by aggressive social media campaigns during the presidential election. Our guest, Craig Silverman, has spent much of his career as a journalist writing about issues of accuracy in media ... He's now the media editor for the website BuzzFeed, and he spent much of this year writing about fake news, rumors and conspiracy theories that gained currency in the presidential campaign - where they came from, why they got so much engagement on social media and what should be done to reduce their impact on public discourse."

The Rise of Progressive Fake News: The disempowered left now faces its own kinds of hoaxes and fables (The Atlantic)

"The phenomenon seemed to confirm theorists’ worst fears about the internet. Given the choice, democratic citizens will not seek out news that challenges their beliefs;  instead, they will opt for content that confirms their suspicions ... But a preponderance of fake information ultimately harms the political cause that absorbs it."

The Future of Truth and Misinformation Online (Pew Research Center)

"Experts are evenly split on whether the coming decade will see a reduction in false and misleading narratives online. Those forecasting improvement place their hopes in technological fixes and in societal solutions. Others think the dark side of human nature is aided more than stifled by technology."

"Information must be used in the correct way for its value to compound. 'Pizzagate' is just one example of how spreading false news and information can have a measurable and negative impact. It is enough to give pause for every Internet user to ask, 'how can I be sure what I read is real and how can I stop the proliferation of what is not?'”

We Tracked Down A Fake-News Creator In The Suburbs. Here's What We Learned (NPR)

"Coler's company, Disinfomedia, owns many faux news sites — he won't say how many. But he says his is one of the biggest fake-news businesses out there, which makes him a sort of godfather of the industry ...'The people wanted to hear this,' he says. 'So all it took was to write that story.'"

"In the final three months of the US presidential campaign, the top-performing fake election news stories on Facebook generated more engagement than the top stories from major news outlets such as the New York Times, Washington Post, Huffington Post, NBC News, and others, a BuzzFeed News analysis has found ... During these critical months of the campaign, 20 top-performing false election stories from hoax sites and hyperpartisan blogs generated 8,711,000 shares, reactions, and comments on Facebook."

"In a study conducted by Eszter Hargittai and her colleagues at Northwestern University, 102 college students went online to answer questions about things that matter to them—like how to advise a female friend who's desperate to prevent pregnancy after her boyfriend's condom broke. How did students decide what to believe? One factor loomed largest: a site's placement in the search results. Students ignored the sponsoring organization and the article's author, blindly trusting the search engine to put the most reliable results first."

How Can Students Be Taught to Detect Fake News and Dubious Claims?  (The Chronicle of Higher Education)

"The answer isn’t always clear. For many academics, the closest proxy to this set of skills falls under an umbrella known as information literacy — or the ability to find, evaluate, and use information. It’s been taught in colleges for decades, and is often spearheaded by librarians or English-composition professors."

"Above all, the World Wide Web is a web, and the way to establish authority and truth on the web is to use the web-like properties of it ... In short, we need a web literacy that starts with the web and the tools it provides to track a claim to ground."

"Our ongoing research at Project Information Literacy (PIL) points to a dramatic drop in expectations, from truth to consensus among college educated youth."